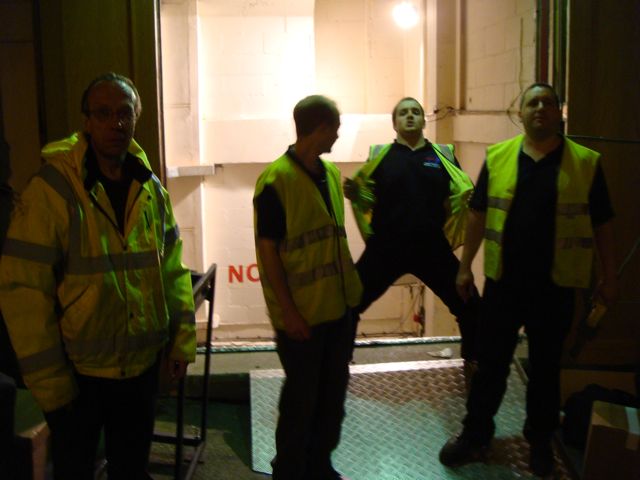 Big-up’s to Mini-Me his brother Mega-Me and the whole crew at the White Rock Theatre Hastings, you guys are awesome and I can’t wait to go back, thanks for all your help, I wish every tour date could go so smoothly.

As some of you will know Derrens extensive taxidermy collection extends from the small and bizzare to the rather large and … well bizzare. The constant request of how to skin a badger can get overwhelming at times but finally someone came to our rescue and now you too can get involved with instructables own guide to creating a Duck Mouse, a Mouse Mouse and the essentual Bird Taxidermy (WARNING:Not for the easily offended, overly squeamish, holier that thou, fuss-bucket.)

If you do attempt any home taxidermy please remeber to take care, not to eat anything thats not really fresh and to send us the photos.

Here’s an interesting post at AdSavvy all about – you guessed it – the psychology of magic, mediums, politics, and advertising with more than a couple of references to some chap called ‘Derren Brown’.

This is old but I have been sent it many times now so I’ll repost for those of you who haven’t seen it before.

Sad news for xmas day, but I’m sure you will have seen on the news that today we lost a great playwright and political activists. He was 78.

Harold Pinter, CH, CBE, Nobel Laureate (10 October 1930 – 24 December 2008), was a world-renowned English playwright, screenwriter, actor, director, poet, political activist, and president of the Central School of Speech and Drama, a constituent college of the University of London. After publishing poetry as a teenager and acting in school plays, Pinter began his theatrical career in the mid-1950s as a rep actor using the stage name David Baron.

During a writing career spanning over half a century, beginning with his first play, The Room (1957), Pinter has written 29 stage plays; 26 screenplays; many dramatic sketches, radio and TV plays; poetry; some short fiction; a novel; and essays, speeches, and letters. He is best known as a playwright and screenwriter, especially for The Birthday Party (1957), The Caretaker (1959), The Homecoming (1964), and Betrayal (1978), all of which he has adapted to film, and for his screenplay adaptations of others’ works, such as The Servant (1963), The Go-Between (1970), The French Lieutenant’s Woman (1981), The Trial (1993), and Sleuth (2007). He has also directed almost 50 stage, TV, and film productions of his own and others’ works.

Despite frail health since 2001, he has continued to act on stage and screen, most recently in the October 2006 critically-acclaimed production of Samuel Beckett’s Krapp’s Last Tape, during the 50th anniversary season of the Royal Court. In addition to continuing to write (mostly poetry), to give interviews, to speak about political issues, and to attend theatrical and cinematic premieres of his own and others’ works, he accepted the presidency of the Central School of Speech and Drama in October 2008.

The above painting by Derren was done in 2003.