I tweeted for any questions about Apocalypse. As imagined, with over a million followers the response was very enthusiastic, so I’ll answer the most repeated questions and address a few points as best I can. Thanks everyone who submitted questions.

WHERE DID THE IDEA COME FROM?

Iain Sharkey and Stephen Long, my co-writers and I, sat around playing with ideas. It seemed to good to be doable – too big, too expensive, too unproducable – but my brilliant production team managed to make it work with very little compromise. And once we knew we could do it over two parts, we were able to then really try and write it like a horror film. Mark Gatiss came on board to help in the initial stages of the post-apocalyptic story, and a brilliant writer called Ben Teasdale worked closely with Sharks throughout the process to get the final narrative in place. It was, as they say, sooooooo exciting.

WAS STEVEN AN ACTOR?

Despite conspiracy theories and rumours online, Steven is not a stooge, or an actor, or in any way just playing along. Same goes for his family and friends that you see in the programme. They’d all have to be actors too. And all his REAL family – and anyone that knows him – taken away and quietly killed. My shows always provoke a flurry of people insisting it’s all fake, and I’ve come to expect that – exhausting and hurtful though it can be after months and months of love and sweating blood to make such massively ambitious and heart-felt programmes.

I have never, ever used stooges or actors in that way. It’s artistically repugnant, lazy and just unnecessary. And impossible to pull off, as anyone that knows him would of course be able to say so. We spent months setting up Steven’s experience, getting his family on board, and spending a vast sum of money making it as convincing as possible for him, and all our efforts making sure that he experienced a real transformation. To fake all of that with an actor would be pointless. A few theories have sprung up online – firstly that he is a working actor who has appeared in a comedy ad. I’ve seen the ad – that is not Steven. That is an actor with dark eyebrows who does look hilariously like him, but isn’t: 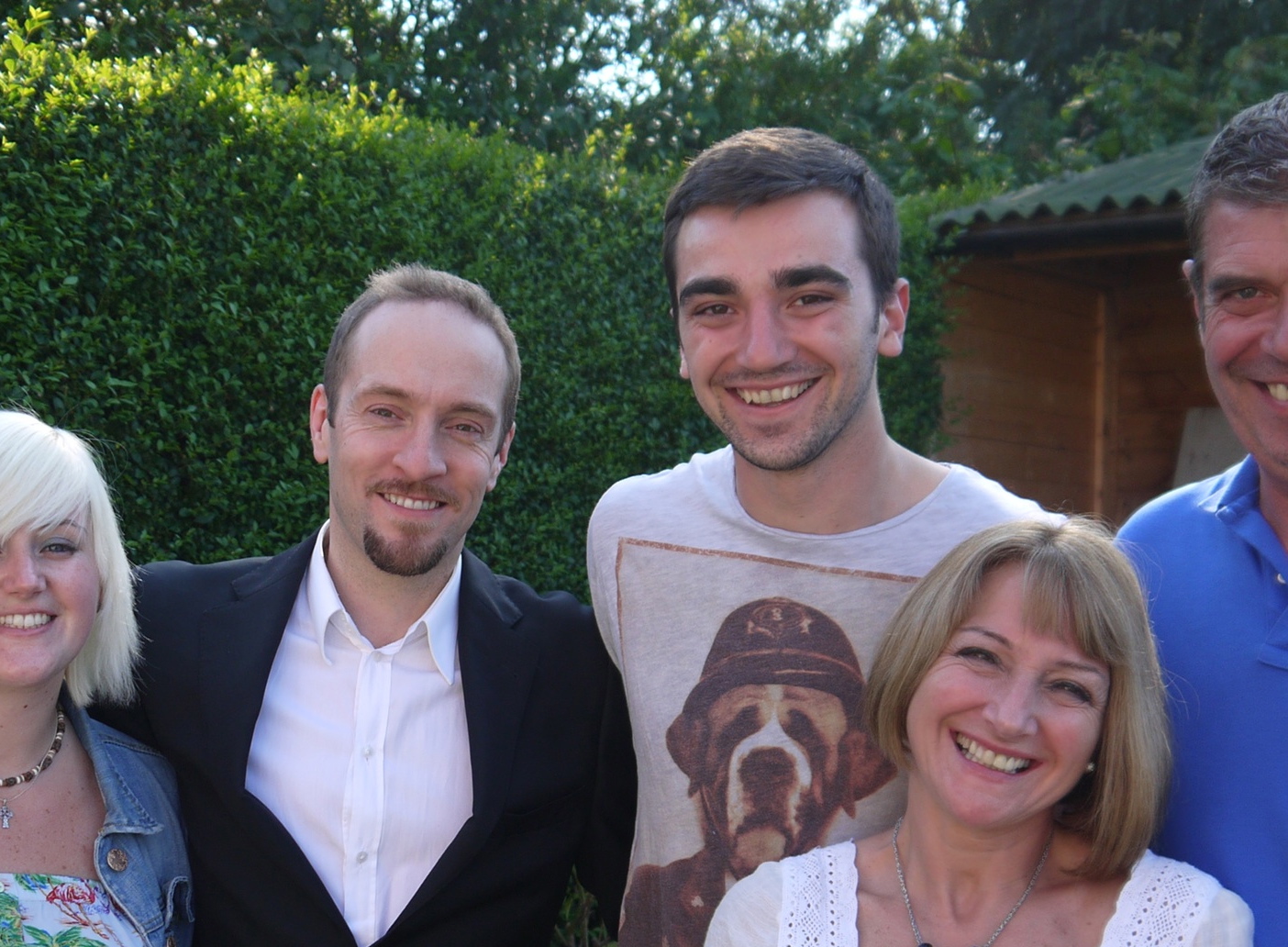 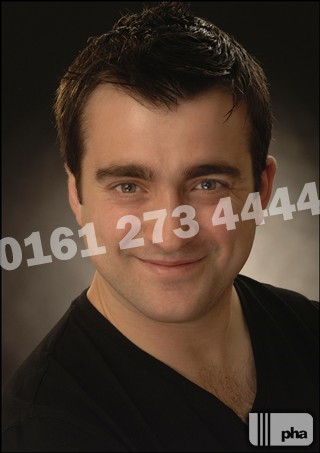 Annoyingly similar: but not the same guy. Left: Steven Brosnan (now a teacher) and family. Right: Karl Greenwood (actor who starred in a noodle ad.)

Others have found a picture of Steven with Adam Buxton taken four years ago when Adam was filming a pilot in Steven’s home town. Steven was an audience member and had his photo taken with Adam. Standing with an actor in a photograph does not make you an actor. Adam says “He was not an acting in the pilot. He was in the audience.”

Lastly, concern has sprung up in some quarters because Steven had a profile page on a popular casting site where a lot of people of all ages put themselves up for extra work and crowd/audience stuff for TV shows (this was NOT how we found him but a lot of people sign up hoping to be on TV). He has since changed/tried to remove his profile as he was upset at the negative attention from people who took it to mean he was actually an actor.

We have received this comment from Simon Dale who runs Casting Call Pro, the website in question:
“We’ve seen the rumours that a person on Derren Brown’s show is an actor, and all the tweets etc. surrounding it, and the media reporting of it.”

Aside from an ‘ensemble’ school production he has never, ever, ever acted. Even if he returns to this early interest in the future (his brother works as an occasional actor so it’s possible he might), it won’t mean he was acting in this show.

All the people who take part in these shows are 100% real. Matt Galley, from Hero at 30,000 ft had similar accusations of being a stooge, from similar conspiracy-driven quarters after his show. Part of the pity of these rumours are that it’s always hurtful for the participants involved who have been through an emotional, transformative experience, are feeling really good about themselves and have been looking forward to the show going out. It’s horrible.

Steven was chosen from thousands who applied to be part of the show, as we explained at the start. He was chosen because he was suggestible enough to allow me to put him asleep quickly, fit our desired profile of someone who took his life for granted, and yet was likeable enough to carry the show – a rare combination. His mum, dad and family are all real too. They are a family living in Buckinghamshire.

On another note – it simply wouldn’t be permissible now to pretend someone was a real member of the public if he or she was acting. Misleading the public in a TV show is a big deal, and a massive lie like that wouldn’t be permitted by the channel. But that’s beside the point: I just don’t use actors in that way. These stunts are not faked. You can just enjoy the show.

No. I knew it would all work out very well, be worth the ride, and that it was important he go through something very emotional to get there. It’s quite an intense experience watching him in the truck through the monitors: it’s impossible not to feel a strong sense of attachment. I think our first moment of ‘Wow, this is really happening’ was when he woke up and was watching the army broadcast we had created. But no guilt – plus I’ve gotten used to the residual background feeling that I’m probably going to hell.

HOW DID YOU STOP STEVEN FROM TALKING TO FRIENDS ABOUT THE METEOR ATTACK?

There was no need to. The initial meteor shower, as explained, was real: the second nastier wave of asteroids was invented, but it didn’t become a serious threat (and therefore anything that other people should have known about) until he was on the coach.

I HAVE SPOTTED A CONTINUITY ERROR. DOES THAT MEAN IT’S ALL FAKE?

Steven was filmed in his post-apocalyptic world for a long weekend. Everything is crunched down to tell the honest story in the short TV time we have. The ambulance journey, for example, you see in the first episode, took over half an hour (during which Iain came in and out to assure them all was ok, allowing us to keep a check on Steven’s welfare). We needed them to keep driving while we ensured that the next location was all set up. When things get crunched down, and sometimes shots are switched around by the editor, little glitches in continuity may occasionally occur. They may delight those who for some reason are determined to pick through every moment to find fault, but they mean nothing other than some time has probably been cut out or very occasionally a different shot has been used for some technical reason. When trying to tell a 48 hr story filmed with hidden cameras in just over an hour, it’s likely to happen.

Big chunks have been lost for time while we’ve tried to preserve all the action. I’m really hoping that if/when this comes out on DVD we’ll be able to include the ‘making of’ and some unseen footage as DVD extras.

WERE YOU WORRIED HIS FAMILY AND FRIENDS WOULD GIVE THE GAME AWAY?

It’s always a possibility, but people are generally very good at not spoiling it. His family wanted to see a change so had the motivation to keep it a secret, and his friends were up for it too. When we choose the person to use, we also vet family members and anyone else we need to bring in to make sure there’s no one there that might concern us from that point of view. So far, fingers crossed, it’s never happened.

CAN YOU REALLY HYPNOTISE SOMEONE THAT QUICKLY AS YOU DID ON THE BUS?

Not completely from scratch, no. It does look impossibly quick. However, as we explained in the programme, one of the reasons we chose him because he was highly responsive to suggestion, which allows me to get him used (during the audition process) to the suggestion of going to sleep on command. You see him zonked out at the start of episode one, in the auditions. Once that’s in-built, it’s easy enough to trigger off again, weeks or even months in the future. His hyper-alert and confused state following the meteor attack, plus the total out-of-context surprise of my voice and person being suddenly present, really help too. There was no way we could start and finish the stunt without putting him to sleep on those occasions, so it was necessary to get him conditioned to this early on.

WHAT IF HE HAD ATTACKED ONE OF THE INFECTED?

We removed everything that he could have feasibly used as a weapon, and controlled those scenes very carefully so that he would have neither the motivation nor the chance to do so. The whole idea, remember, was not to get close to them for fear of contact or contagion. Attacking them would be the last thing you’d want to do. Plus of course the actors knew to control him if anything like that happened.

IS STEVEN GOING TO BE OK?

Of course. Watch to the end of the show this Friday. We vet our participants – using independent experts – very carefully to make sure they’re robust enough for this kind of thing, and we had medics and a psychiatrist watching him 24hrs. We take our duty of care very seriously.

HOW DID YOU GET THIS PAST THE ETHICS COMMITTEE? YOU WOULDN’T BE ALLOWED TO DO IT

I get this one a lot. Such committees exist only for clinical experiments. For TV, there are lawyers and health and safety people who of course must be involved. We make sure that they are happy, and the lawyers are involved in all stages of the show to make sure the viewers aren’t misled and that everything is above board. We take every possible care to ensure that our guy will be okay throughout the process and after, and the C4 lawyers and independent psychologists we have on board are a big part of that. He is carefully taken through a powerful experience that brings him to a much better place – the result is a hugely positive one for him. In many years of making these sorts of things happen, people have always been exhilarated and delighted. No-one has PTSD or flashbacks or any of the other things I get asked about, as it’s always a hugely positive, much-valued, hopefully life-changing experience for them.

WHAT EFFECT DID THIS HAVE ON STEVE? AND ANYONE ELSE INVOLVED?

Again, you should watch Ep 2 to see how he turns out. But I don’t end my involvement when the show is over. I have kept in close contact with Matt Galley from Hero, and the same with Steve. It’s important to me that these shows do the job they’re supposed to – plus after becoming so attached to someone during the process it’s hard to just thank them and walk away. These people end up becoming my friends and that’s part of the joy of making the shows. And yes,we were all affected by the show one way or another – it was quite emotional for all of us watching it in the truck. But, you must see it through to the end.