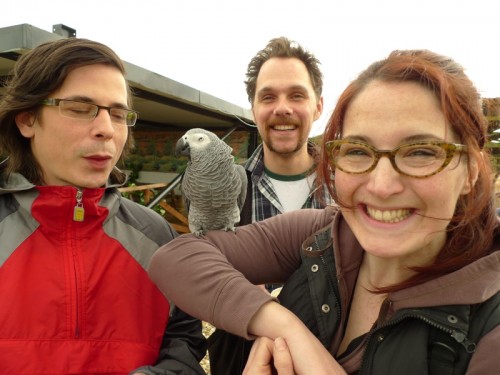 While playing in Grimsby we spent an afternoon in the sensational National Parrot Zoo, in Lincolnshire, of which you’ll already know that your dedicated Blogger is Patron Saint. The Zoo is the largest of its kind in Europe, set to expand even more, and is uniquely dedicated to the welfare and rehabilitation of sick parrots. Alongside that, Steve Nicholls, the Zoo’s profoundlyÂ committedÂ owner, is undeniably the country’s most knowlegeable expert on these animals, carrying out extensive research into the much misunderstood beauties. The place is a moving testament to his understanding and knowledge.Â

Jen and Iain had never been before, and were bowled over. Steve showed me where he’s planted 10,000 willow trees for the new extension across into adjoining fields. It really is a wonderful place and well worth a visit.

They are the most sensational creatures. Steve was telling me that quite a few of them had owners during the war, and have lived through the Blitz, the sounds of which they have stored away for decades. Occasionally, the right sort of noise will trigger one off, and a whole host of sounds will emerge: milkman, morning chatter, then the sound of a bomb dropping. The whistling arc of the descending bomb would then re-awaken the other older birds to their own recorded memories, and soon a whole aviary would be presenting the sounds of the 1940-41 arial attack. Astonishing, and oddly moving, to think of all that history locked away in those little feathered heads.Â

Here’s one bird who spent a little too long listening to the muffled sound of its owner on the phone in the next room:

And this is just wonderful. Steve was out amongst the aviaries at night and came across a group of Amazons huddled together, all asleep apart from one, who was singing ‘Go To Sleep My Baby’. Presumably this used to be sung to it by his owner. By the time Steve returned with a camera, the bird had moved onto a different song, which we’re having a hard time distinguishing. We’re guessing it’sÂ nothingÂ in particular, if you know it, please tell us, and we’ll send you a little prize as a thank you:

Make sure you visit the zoo and say Hello from me.Â

The last couple of days began with a lovely welcome by the terrific crew at Sheffield City Hall. It’s a tricky venue, for technical reasons, in which to set up the show, but the excellent and super-friendly staff more than make up for it, Â and both nights went well. Andy Nyman, who has been filming Black Death in Germany, managed to make it over for the first night to see the show up and running for the first time since previews. And to show us his handsome new filming-beard.Â

Sheffield did not, however, bring with it any useable wi-fi in the hotel (I’m NOT paying for it, that’s just plain wrong), hence you not hearing from me for a few days.

I meant to post a thank you for all the gifts I’ve been getting – thank you so much, it’s very kind indeed. And for the six of you at Sheffield last night standing at stage door in the driving rain for over half an hour when I’d been told no-one was bothering… apologies and thank you. Hope none of you caught colds.Â

Tonight we’re in Reading, with our grinning friend and handsome songsmith Stephen Long in the audience. And our very own Phillis will be there too, hiding at the back… see if you can spot her.Â