The curious phenomenon of audience identities continues: Cardiff crowds (though I expected a big raucous crowd) were very quiet, but saved it all up for the end. Which was a relief the first night: after that, I knew to expect it. I, to the amusement of many, struggled with audience members’ names and answers, as I did in Belfast and Dublin. The combination of unfamiliar names, strong accents, microphone amplification and the wobbly acoustics of the auditoria made this an unexpected comedy highlight. I do apologise.

Woking brought great, enthusiastic audiences – or rather ‘brings’, as I have one more night there tonight. The house has a resonant, bright sound, which helps the show enormously – it’s lovely to hear every reaction clearly. We have all benefited from a day off and time at home – although my builders have all assembled to work at mine this week, which has made the long-awaited time at home more stressful than being on tour. But hey, whaddyagonnado. Tonight, Andy comes to see the show: he hasn’t even seen it this time round, being taken up with Ghost Stories (transferring to the Duke of York Theatre on June 25th). That’ll be good.

The voice is improving, and I imagine I’ll be back to signing once we get to Stoke on Tuesday.

‘Tis true. Our very own Neil, from the Parrot Zoo, of which I am Patron Saint, presents Coco The Mind Reading Parrot at SkegVegas – the tourist attraction centre for Skegness. Coco has been trained in all sorts of arcane mentalist techniques and presents them to the public for the price of a pumpkin seed and a chunk of finger. Here’s Neil and Coco practising their elaborate two-person code Â (man on left saying ‘Is it a cup of tea?’): 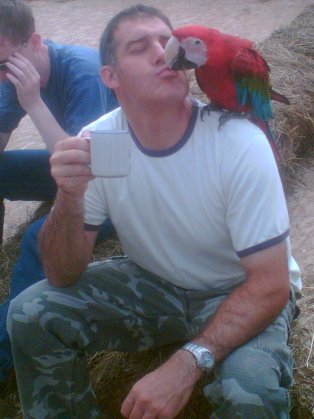 Expect further updates from Coco as they unfold.

PS Thank you also for your response to the Dench portrait. I did anticipate the request to see it in its various stages: once I’ve absolutely finished it and have had it properly photographed, I will post a little step-by step thingette in case it remains of interest.