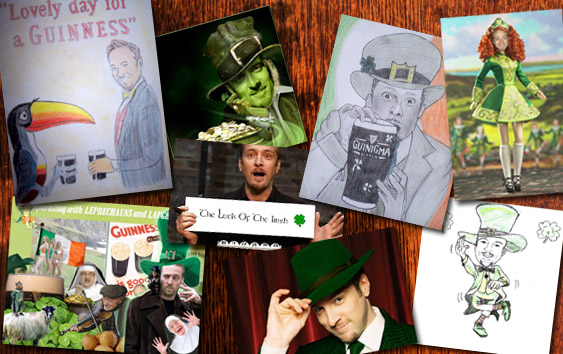 Dublin audiences have a certain mischief about them absent in Belfast, and probably anywhere else I’ve come across. The Grand Canal Theatre was wonderful: it has only been open a few weeks in there, and it is great to play. And a long time coming: the crumbling Olympia has its charm, (it’s a unique experience to perform with rain coming in through a hole in the roof onto the stage), but the new theatre, part of the O2 empire, is a triumph. My voice (thank you for the well-wishes) has become stronger, but I still have to be careful to rest it before and after shows.

The final night in Dublin was not as raucous as I expected. The final night was not the best, (a certain punch was lost in aspects of the second half) , but the crowds each night were marvellous, oddly giggly and very demonstrative. There is another unique aspect to performing there: evenings out start late in that city, and a 7.30 advertised starting time, I was told by locals, is taken as 7.30 for 8. Each night, ready and poised to start the show as 7.30 on the dot, we were still awaiting around 600 people. Each night I eventually walked out around 7.50. I’m not aware of this happening elsewhere, and am unsure whether we should advertise it for 8 next year, or whether that will be taken as an 8.30 start… A curious but somehow fitting idiosyncrasy of that very special city. And the Guinness… oh yes.

Sunday morning we left for an early ferry at 7 am. This is what the rest of the bunch look like at that time: 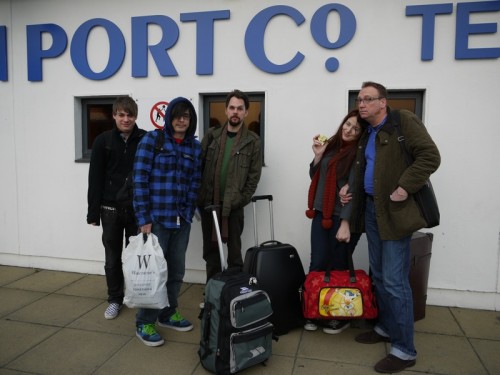 It was a very long day. We slept a bit on the ferry, and got up only to go and watch an advertised magic show on the deck below. It turned out to be a show for the very young kids who, sensibly, would benefit from the distraction, so we left the cheery chap to do his best with them. Although I did consider standing at the back and staring him out for the whole thing. After hours of intermittent napping and trying to get the internet to work, we poured out, onto a coach, and then onto a minibus that got us into Cardiff for about 8pm. It was a long, scenic route, punctuated by a stop for truly disastrous fish and chips in Aberystwyth. Here’s Coops and popular new boy Jonas at unnamed café: 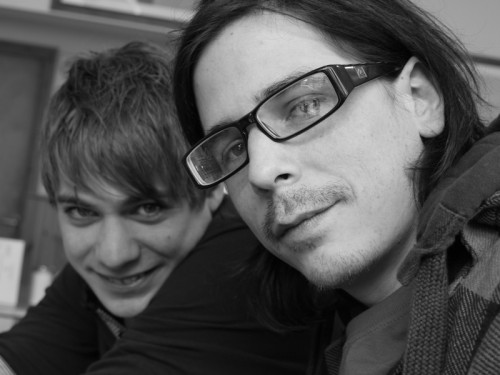 It was a long drive after a long ferry-ride: we were exhausted and it was difficult to sleep. Conversations, bleary and hallucinogenic, at one point turned to a hushed discussion of how, if we absolutely had to, we could best kill the driver and dispose of the body. Iain, as we knew, is something of an expert on mass murderers, and much of our solution hinged on whether or not Jennie had anything in her kit which would allow us to grind the driver’s bones down to dust. She didn’t, and he was spared.

Tonight’s show is at St Davids: another concert hall, but another guaranteed very good crowd. I’m being spoilt at the moment. Maybe see you there.