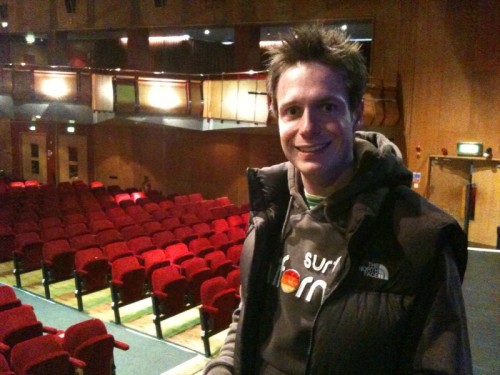 Ipswich brought great audiences. A little slow to warm up on the first day, Thursday, they were lively and forthcoming soon enough, and the auditorium has a fresh and bright sound from the stage. The shows felt good. We were staying in the excellent Salthouse Harbour Hotel, and looked after by a hugely friendly staff. Rather nicely, there were only ten or so people at the stage door each night, all pleasant and unassuming, which meant charming, relaxed hellos and time to chat.

Southend’s first night was fine but did not feel great to me. After a couple of loud houses, The Cliffs Pavilion’s auditorium stretches far back, away from the stage, and the balcony sits at its furthest reaches. It means that from the stage, you only hear the front half of the audience. On top of that, the Sunday night crowd was typical of those from that day: tired from an afternoon’s sloth or activities, aware of work in the morning, a little unresponsive. There is a classic pattern, known to actors and entertainers, of a rising enthusiasm from the house as the week moves on, generally peaking on Friday with a lively and attentive audience. Saturdays can be boisterous, but are also slacker than the Friday, and made up of larger, less attentive groups. Sundays generally are a little quiet, unless there is a Bank Holiday the next day (which will in itself tend to offer another tired and unengaged crowd).

The show was good enough, but I was surprised by the relatively quiet audience and unfulfilling feedback due to the ungenerous architecture, and the strange energy loop that exists between the audience and me on a good night did not make itself known. Pushing to reach the seemingly silent reaches of the auditorium, my voice was also rather cracked.

The second night – yesterday – was much better. The crowd was lively and responsive, and I had got used to the unhelpful acoustics of the room. My voice was stronger and the audience were once again part of the dynamic of the show. We were also joined by our lovely friend Stephen Long who has worked on previous tours, and who has come out to help out for a couple of nights. It was rather fun to see him carrying things on and off stage: such little changes help keep the show feeling fun and alive for me.

Southend proves to be a pleasant place to sit and read overlooking the sea: I am hugely enjoying Simon Callow’s Being An Actor and a break from the laptop. I have not been Twittering or blogging recently either: the former has started to feel a tad exhausting and joyless of late, so I shall for the moment at least give it a little break.

It’s blustery and wet today, and I think the sea looks its best when it’s grey and bleak. Some poor girl in a flapping anorak is running, enervated, along the sea-front through the miserable weather, and a lady is having a dispiriting sandwich from a plastic lunch box on a bench under a beach shelter. All, in a grim, glum way, is right with the world.