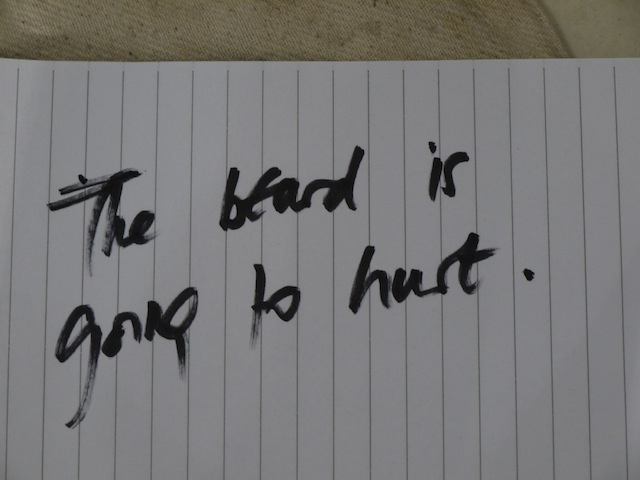 Patrick is a remarkable and deeply fun artist: his works are hard to describe but I shall do my best. In fact, watch this wonderful three-minute film here and you’ll get the idea. They play with our eyes and minds and make us actively participate in the works. His pieces lunge out of the wall at you but you cannot tell as the perspective is painted in reverse… so that a bookcase or a line of Venice houses appears to recede into the distance but is in fact painted upon a trapezium that narrows as it approaches a vanishing point that is in fact struck right out in front of the picture. The effect is an image that appears to physically shift with you: when you pass it, it follows you. I have a few Hughes pieces in my flat: visitors can be seen stopping in their tracks before the first they encounter, swaying from side to side, bobbing up and down. Without exception they cannot tell how it works: they think they’re watching a clever projection until they step around to view the side of it and its three-dimensionality pops into apparentness and they all but drop their drink in disbelief.

Patrick is also a dear friend: his charisma and generosity strike everyone who has the delightful experience of meeting him. He’s seventy, handsome, impressively tall, dresses impeccably in bold, colourful suits and long scarves, and wraps his deep intelligence within a joyous playfulness that is reflected in the range of optical toys and jokes that fill his eccentric flat. He’s a lovely, lovely man, and a radiant example of how I and anyone should hope to be at his age.

I heard Patrick was applying his ‘reverspective’ approach to portraits. Some of you may be aware of the ‘reverse mask’ illusion where we look into the back of a mask and still think we are looking at a face pointing out at us. I have the Einstein head (as mentioned in The God Delusion) and other pieces that work on the same principle. Here’s a delightful old video of Richard Dawkins demonstrating the illusion.

The face variants of this sort of perspective trick work especially well on me. Whereas most people cannot see the ‘true’ nature of Patrick’s pieces and can flip back and forth with hollow faces, I am the exact opposite. So I was excited to hear that Patrick had cast his own face to make a ‘reverspective’ portrait of himself, and we spoke about making one of me. Patrick suggested a portrait swap: one of his of me for one of mine of him. This was hugely flattering and exciting.

It was my turn first: I headed over to Patrick’s studio in east London to be photographed and cast. The pictures tell the story:

Patrick’s studio – you can see his portrait between us in the background. 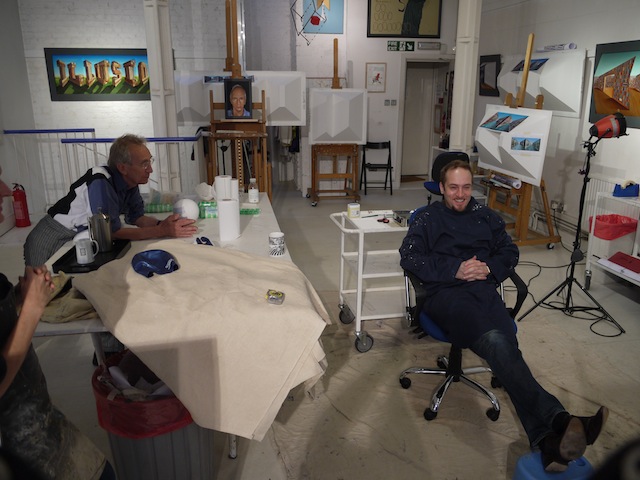 His colleagues cut a sheet of cardboard to accommodate my unusually chiselled features: 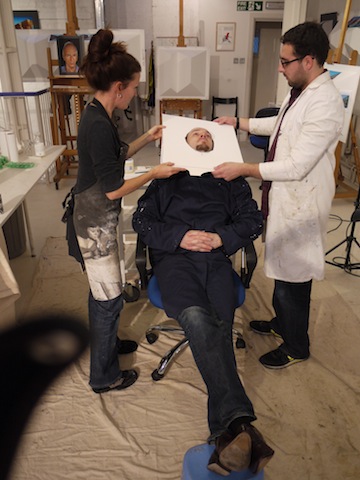 And I don a swimming cap which will stop my hair from getting plaster in it. I think this was the only expression I could make with the cap on: 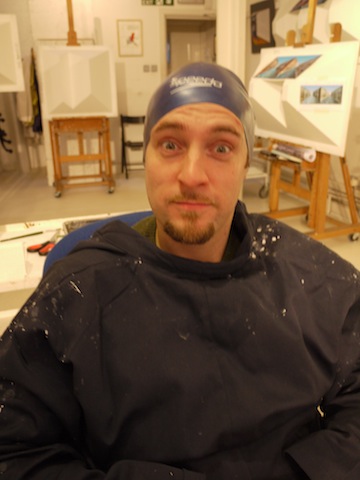 Vaseline applied. At this point I’m starting to get aroused. 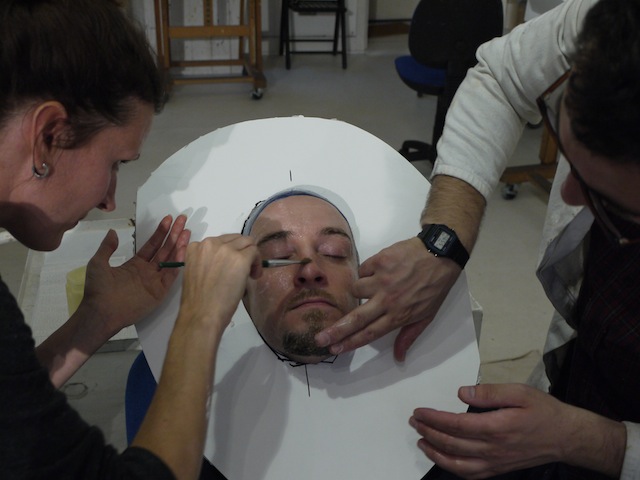 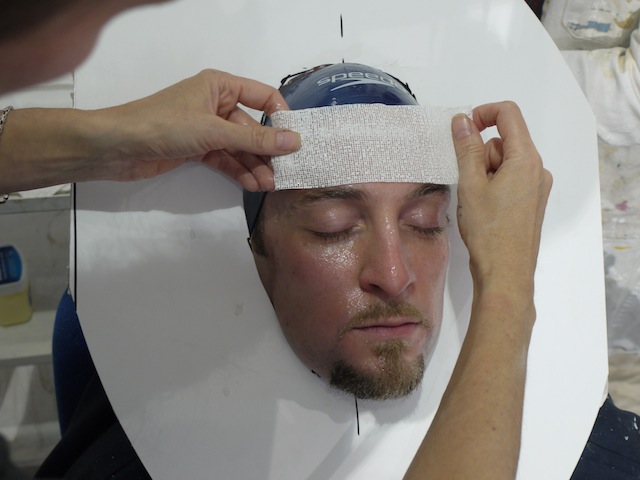 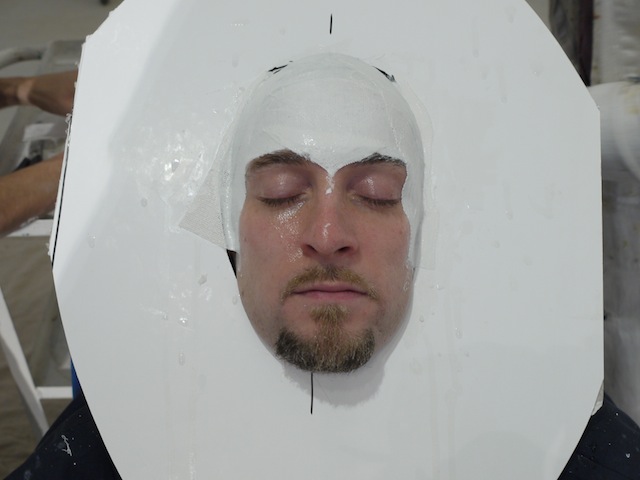 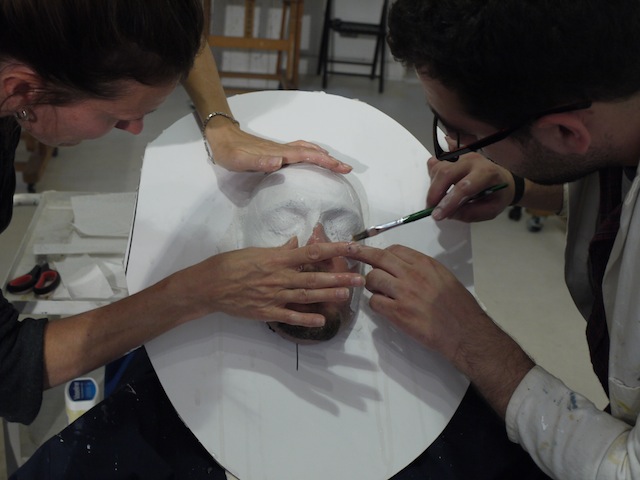 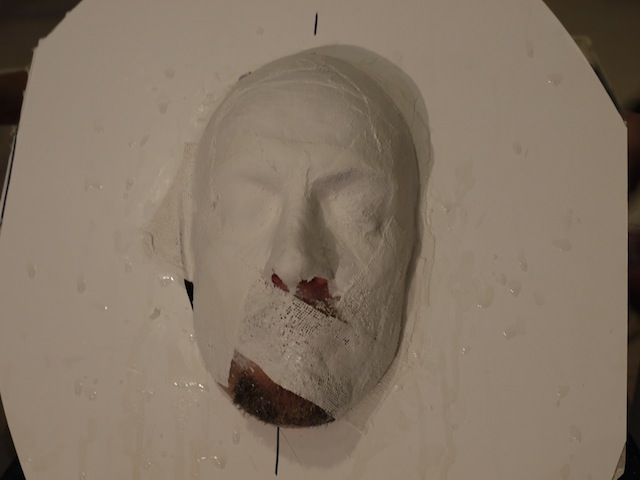 And I’m just going to presume those are drips from the plaster process. 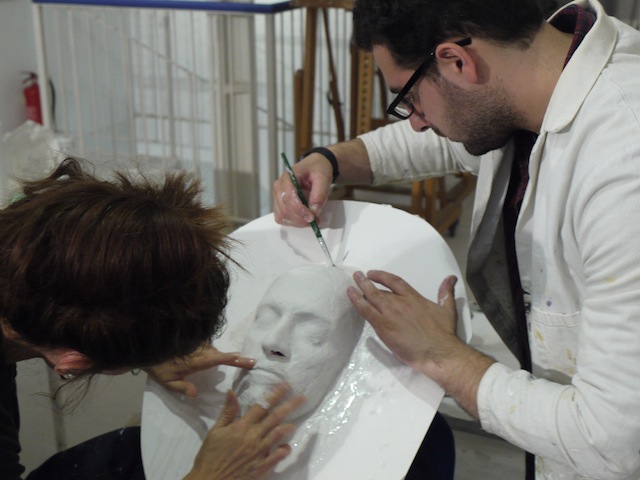 I actually found this quite relaxing. Same way i quite enjoy the dentist: something about not being able to move or do anything, I switch off well and go to my happy place. 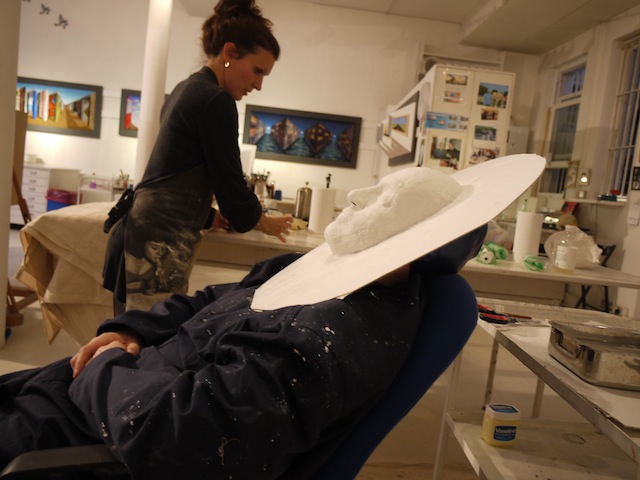 Patrick thought this would be funny. Had no idea he had done this until I looked back at the photos: 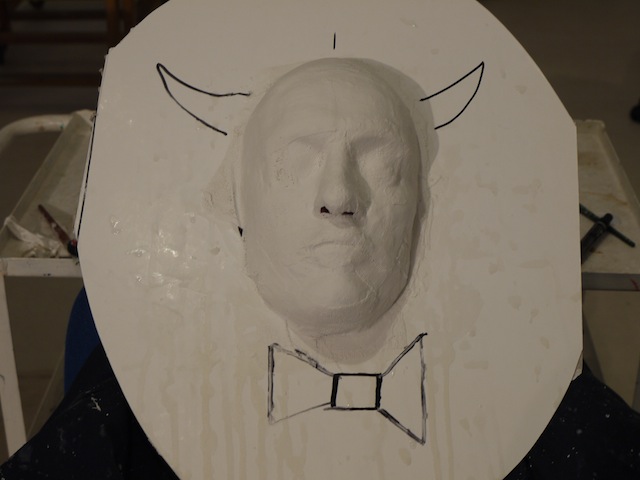 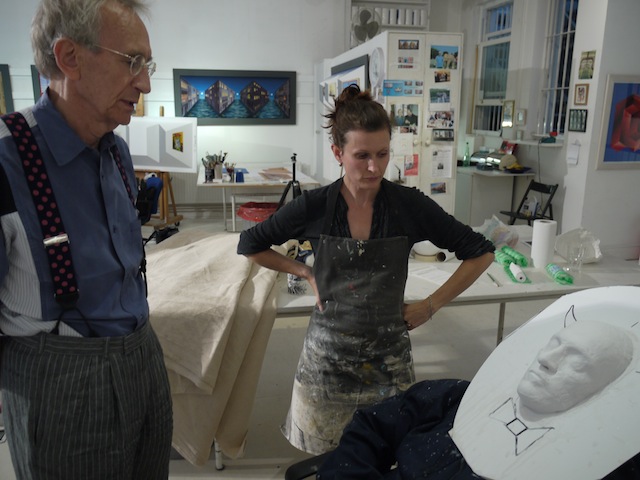 The removal begins. I gesture for a pen and paper and write the following plaintive note: 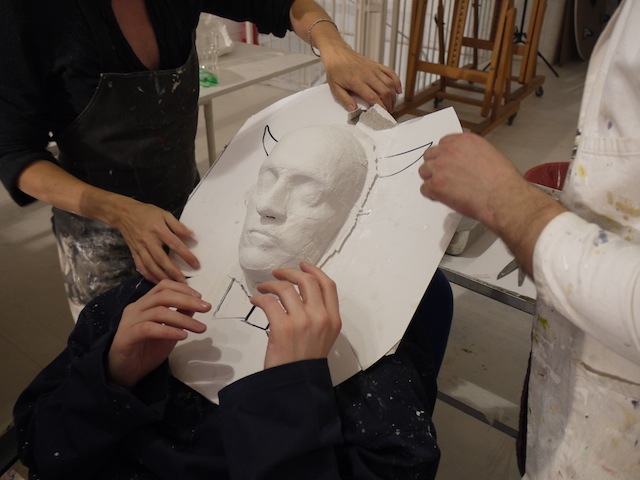 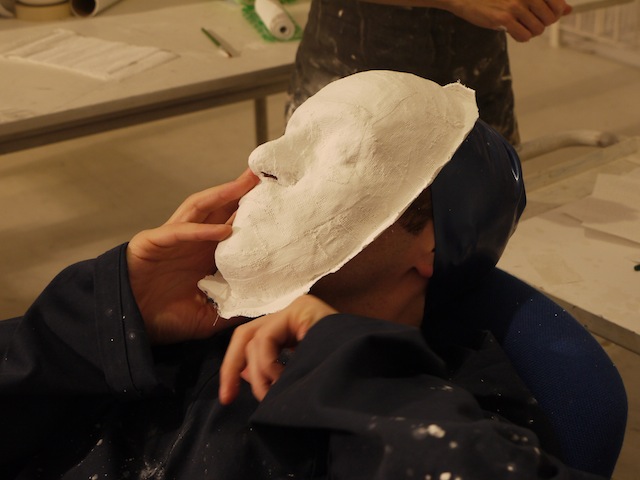 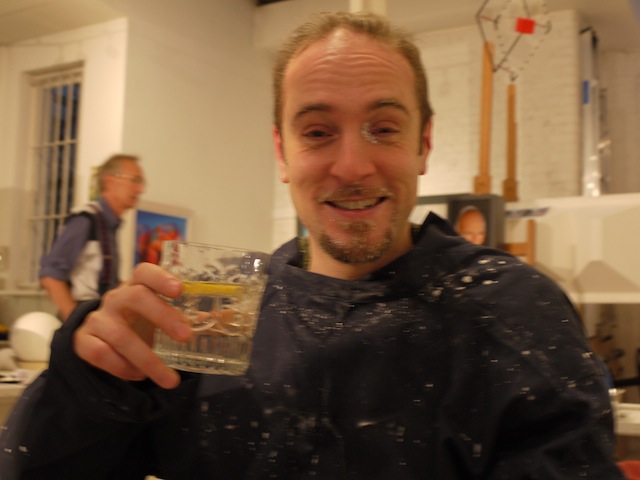 Gin and Tonic, I think. A look inside the cast, and the illusion is already working: 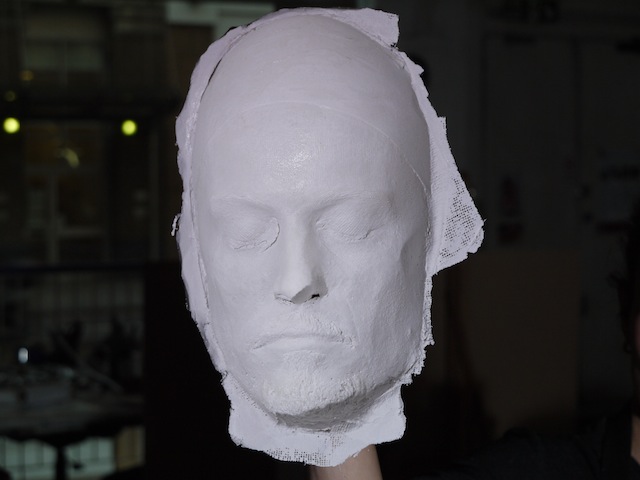 Time then passes. I photograph Patrick to do my own portrait. After a couple of weeks I receive news that the portrait is complete. I head over to see it, but first Patrick’s partner, the writer and equally gorgeous specimen of humanity Diane Atkinson, prepares an excellent supper. Patrick shows me some of his new toys, including a ‘true mirror’ which shows you as you actually, genuinely look (instead of in normal mirror-image as you can only ever see yourself). It’s a disturbing experience. I order one for myself that night: you can buy them here.

The finished, painted portrait is astonishing. Ironically, it does show me in mirror image: it’s a logical result of the casting-and-reversing process that the finished piece offers a flipped version of the subject.

It now sits in my library – it needs flat, soft light to work at its best. Whenever I walk past it, I see it pay close attention and watch my every move.

Video doesn’t quite capture the real-life effect. The movement is bigger, clearer, and so inextricably linked to one’s own movements that it’s a very eerie experience. But here’s a look at it:

And in a separate post – most likely tomorrow – I’ll set out how I painted my own portrait of Patrick. Ta-ta for now.