Well. Here we are. Thank you and hello and yes. About a million years ago, (when there were pirates and dinosaurs, as a friend’s young son cutely pointed out the other day) we opened in Brighton. Madly and with great delight. I switched off Twitter, missed a funeral I desperately wanted to attend, and set about trying to get the show ready for the first preview night. Weeks of exciting 7am – 1am work days and increasingly intense rehearsal spiralled blindly towards the first moment when I would step out and try, for the first time with real people, a show that cannot begin to work without real people taking part.

The first preview was a relief: it always is to receive a lovely reaction and a standing ovation to material that has never been performed before. Nonetheless there was much to change and reconsider, and material was dropped, swapped and kicked into better shape. Polly Findlay, my new director, is a complete poppet and a huge delight. Some of the team is new too: Iain and Jen are not with us this year and have been replaced by a couple of new, brilliant, lovely chaps. It’s a happy bunch, which is very important to me.

Brighton previews over, we opened the official tour in Woking. Now it was time for the show to really get up to speed and find its pace. There’s a tendency, as I don’t work from a tight script, for parts to get fleshed out inadvertently and for the energy of the whole thing to sap. Over this week and the next, In Liverpool, over twenty minutes got added to the show for no reason other than me letting parts sag here and there as I became more comfortable with it. Since then I have done some important reign-pulling and tightened it again. We had some technical difficulties in Woking, and learnt a few valuable lessons, and then heaved ourselves to Liverpool for a week with that most bustling, fun, splendid of audiences. Another brilliant in-house crew looked after us: we’ve been really spoilt so far with excellent theatre teams. It’s a big, heavy set this year to get in. The early shows packed into the back of a van: now we have two juggernauts to house all of our walloping nonsense.

Liverpool was great: the audiences and volunteers a real treat. We finished Liverpool on the Saturday and had to set up in Grimsby auditorium for the Sunday, something which turned out to be beyond our capabilities. At the time we would normally let in the audience, the crew were still building the set. It was ninety minutes late that we opened the house, to, I must say, a remarkably friendly crowd. The venue is a multiple-purpose hall and like many of those venues, you can’t hear the audience from the stage. So I came out fearing that we’d lost everyone’s goodwill, and then trotted through the opening routine to what sounded like four people barely paying attention. It took me a while to trust that people might actually be enjoying themselves. Meanwhile, the desire to make up on lost time helped me knock the pace of the show back into place.

Everything that could have gone wrong the afternoon of that show found its way to spectacularly fail. In a theatre, a huge rig is lowered to the stage and all our lights and headers and things we need to hang are hung accordingly. A hall like Grimsby Auditorium does its utmost to accommodate, but has no such rig: therefore everything has to be hoisted with motors. We broke both of their motors. One of our drivers had got waylaid on the way to the venue through no fault of his own and everything turned up late. The day was one of horrific turmoil. It was only due to the dedication of a profoundly patient, skilled and tireless in-house crew that the show went up at all.

The second night at Grimsby was, of course, super-smooth in comparison. But then the show had to be taken down and packed into those trucks. It was only a two-night run (most are a week or more). Jonas, our sensationally loveable sound and lighting guy, stayed on until the end, which happened at 4 am. He was then up at 7.30 to head down to Southend where we play tonight. Another colossal challenge for everyone involved. Apart from me. The Star. I get to nap and write up my blog…

There has been time for fun. In Liverpool I caught up with my A Level teacher from Whitgift, who is now Headmaster of Birkenhead School. And what a school, and what a headmaster. I went in to be interviewed as part of their quite excellent series of sixth-form lectures – and am sure I dropped the standard having had nothing prepared. Two top prefects – Josh and Tash – kicked off the questions and the whole thing, for me at least, was a pleasure. Afterwards the prefect team of Josh, Tash, Ed and Tom showed me around the beautiful campus. Not for the first time in recent years, I was bowled over by how much nicer pupils are now than when I ranked rather scrawnily amongst their number. How trite it is to complain about the youth of today being such and such and so and so. It’s the automatic, mindless cry of every older generation seeing a landscape of language and culture shift beneath its feet. Kids are without doubt getting nicer. There wasn’t a hint of the snickering shittiness of the class of ’89. I felt like I was meeting university students: already matured, comfortable in themselves, open, tactile, utterly charming. We were NEVER like that. And I have seen this at several schools, although I have no doubt that the residency of John Clark as Head is part of the formula for this school’s particular brand of delightfulness. As a Modern Languages teacher he was always brilliant, bright and effortlessly popular. As a Head he is hands-on, knows all his wards by name and interests, is every bit as popular, and motivated by a deep affection and pastoral urge that I found quite moving. Thank you everyone at the school for making the day such a treat for me.

From the sublime, to parrots and monkeys. Yesterday I went to visit the National Parrot Sanctuary and Zoo in Friskney, near Skegness. I am, as you may know, their Patron Saint. The big news is that they have expanded into monkeys. Any lingering stresses of Grimsby’s first night were lifted the second our shoulders were occupied by huge, friendly Macaws or glorious lemurs. All these animals are rescued, and populate the largest sanctuary of its kind on the planet. Or maybe Europe. I should check. Steve, who runs it without a break, is the greatest expert on parrots in the country – maybe Europe or the universe – and still, after twenty years of running the place, is fuelled by the most contagious passion for understanding the creatures. To listen to his stories is such a pleasure: how one night he sat outside with a glass of wine while a lone African Grey pierced the moonlight with an aria from some previous owner’s favourite opera; how he stood in an aviary and made repetitive clucking noises as part of a test to see how quickly a new sound would be picked up and disseminated amongst the bird community, only to be greeted with an extended stony silence followed by a single ‘Shut the fuck up’ from the ranks of anonymous Greys.

Coops and I were allowed into the lemur house with a dish of raisins. How extraordinary it is to have a creature with opposable thumbs feed from your hand. They don’t grab the bounty from your palm as expected: these glorious, friendly, spirit-lifting bundles of highly attentive fluffiness reach out and grab your wrist and pull your hand closer, and don’t let go until they’re done.

Delights and wonders. Do go see the zoo if you’re anywhere near that part of the world. Unlike any other zoo, where the animals pace or lie bored in a corner, here you walk past and through aviaries where the inhabitants flock to you and beg your attention with a thousand sweet hellos. You leave soaring: every bit as daft and weightless as they are. 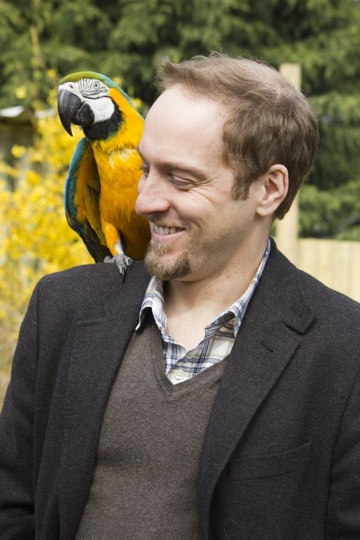 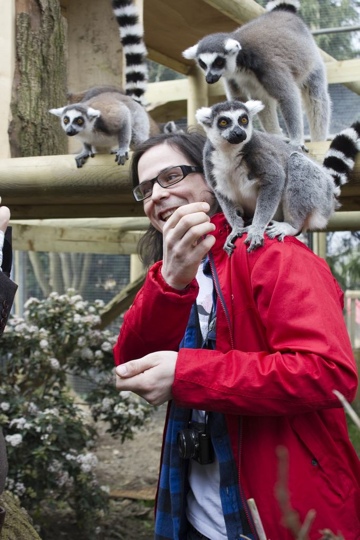 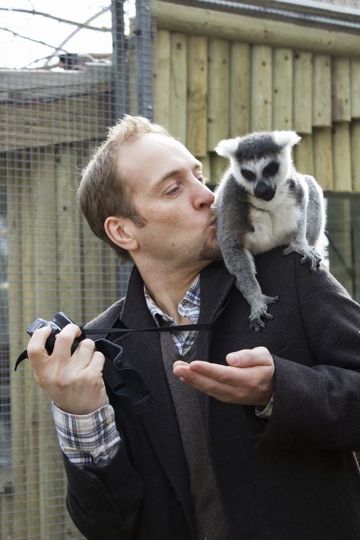