Tucked up on a train to Stoke. Wimbledon was a lovely week. The first couple of days suffered (in terms of numbers) from last year’s London run, so the place was not as packed as the other venues. Monday offered a quiet, older audience and, Tuesday a younger, livelier bunch.

Wednesday was our first filming day. It was the best first filming day so far: normally I get a bit disgraced by the cameras and mess things up. As it was, it was a good night. Thursday, our second filming night, was terrific. The crowd was on its feet way before the end and such a joy. Thank you everyone. Friday and Saturday were a delight too: Friday I had family in to see the show, which always makes it a proper treat. The show looked its finest too, as the lighting had been ramped up to its glamorous, previous West End state. Even the nice floor was re-instated. All in all a good week for the show. The TV production team were great, despite a broken generator. When you watch the show (it’s not as good on TV, and we’ll only be able to include about 70 mins of a 150 minute show) please note the plaster on the ring finger of my left hand. I managed to RIP MY NAIL OFF the night before filming. IT STILL HURTS.

In the few afternoons I had free, I worked on a new picture of Rufus Wainwright. This one has taken some wrangling to get right, and now I must leave it alone for a while to continue with the show. But it’s a relief to leave it in a presentable form. It’s at least better than the old one, which I painted before I knew him well.

Those who know the previous work will see a move towards less caricatured images. I’m rather enjoying that. After a break of eighteen months, this is a new direction. I am getting asked how long these take: the best answer is ‘a few days’. I have to do the piecemeal at the moment as I have so little time to dedicate to them. But it’s such a pleasure. I listen to Rufus constantly when painting anyway: I switched back and forth to Richard Strauss, which I think he would like. The new album has hints of Debussy, so he has too been included: some varied sounds have wafted from my studio this last week.

Tonight brings episode 2 of Derren Brown Is Kind Enough To Spend A Few Moments Of His Valuable Time Taking A Jolly Good Look At This And That. I do hope you enjoy. If not, your bum stinks. 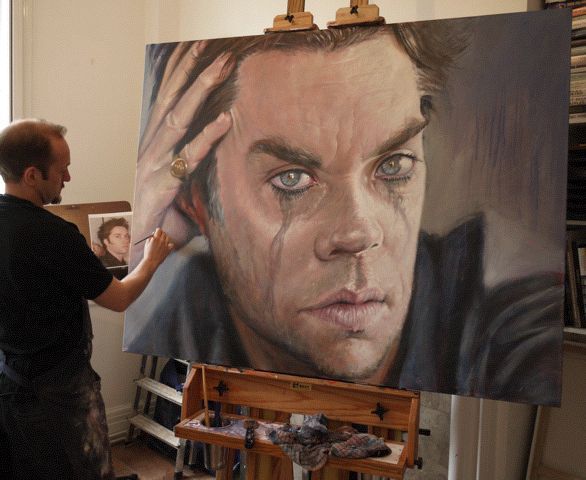