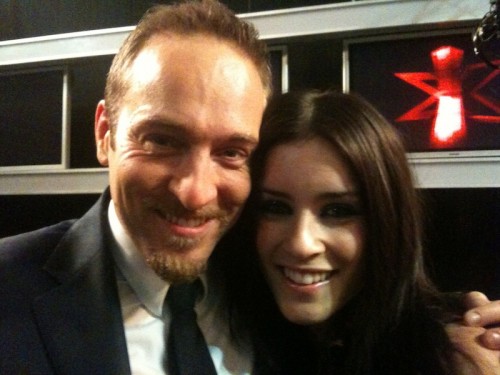 Yes, I know. It doesn’t exactly fit the ‘brand’. But once a year for ten weeks or so I plug in the TV in the bedroom and follow this extraordinary show with an exhausting mixture of anger and delight. I cannot watch the auditions, as few things disturb me more about modern TV than people being humiliated and misled for our entertainment, but once the live shows are up and running I can’t wait for Saturday night. I’m still disturbed by it: something in me worries at the idea of a show offering a very narrow vision of success to a group of talented and vulnerable individuals and groups, eleven of whom we have to see dramatically lose in order for one to grasp this dubious prize. I’m niggled by the voting structure, and whether the public vote is a huge exercise in misdirection. And above all I hate watching people lose. I hate the booing and the vile press frenzy; I loathe myself for moments when I want someone kicked off the show, or for sharing in an ounce of that hostility.

Then last night, in one whirly, girly evening, I got to see the show and meet everyone.

I arrive about six o’clock and am immediately supplied with sandwiches, wine and supportive briefings by the team: Phil, Jules, Liz, Rob, Chris, Eddie, Helen and many more check that every possible need I might have or could imagine is entirely satisfied. I chat to Sara from the Daily Mail, quietly up for having a huge row with her across the Plexi-glass of the panel’s bar-table and frustrated that she seems really nice. At ten to eight we are ushered through into the studio – up through a dark gallery (whacking my head on the edge of a door), across the miniature Xtra Factor studio that sits at the top of the main studio like a projection booth, and then down into the main auditorium. It is, as indeed everything and everyone turns out to be, rather smaller than you imagine. I remember the crane shot over the audience from An Evening of Wonders and how misleadingly huge it made the Old Vic feel, and this is the same: certainly a very large studio as far as studios go, and a splendid extravaganza of a stage, but shockingly modest in comparison to the image one realises one has carried in ones head.

After much wide-eyed soaking up of the atmosphere, and cross-aisle pledges of support to the nearby Solomons (who all – boys and girls alike – look like Stacey), I get nudged, and turn to see the familiar faces of Lloyd, Stace herself, Rachel, Lucie and Joe coming up the steps next to me. I almost burst with excitement. It seems they’re going to start their group song in the audience this week. I give a big thumbs-up to Joe, who grins dentally back, and then the show is gearing up to start. There’s an excellent warm-up, we’re all briefed on when to stand (it was less clear when we should sit down, so for most of the show half of us were stood, looking across concernedly at the other half who were seated and wondering who was wrong), and then we all count down the final ten seconds and the opening titles play. It’s fantastic. Dermot comes out, all brilliant and just like on telly, (small, yes, but we knew that), dealing with God knows what going on in his ear and so perfectly on top of everything. Then – glory of glories – here are the judges, who have little to do on the Sunday show, emerging from the big screen, and tiny. Dannii is tiny, Cheryl is teeny, Simon is small, all head and shoulders, and Louis is but a wee fella himself. They sit at their smaller-than-expected desk, maybe five rows in front of me (I’m sort of behind Simon).

It’s rather hard from the auditoriumn to hear anything that the judges are saying, but the astonishing production of the whole thing is marvellous. It rocks. Seeing it in the flesh makes it both seem less real (hard to hear much of what is being said; generally overwhelmed by the noise and excitement; no benefit of close-ups to lock you in to the action), and of course more real (the person being knocked out is a living breathing young thing a few yards from where you’re sat).

We watch a very talented young lady sing beautifully, an adorable chap sing very well with a bad throat, and then we see the former forced to leave the competition. Presumably Rachel would not lose to Lloyd (tiny, again) if the public voted purely between those two, and both contestants are now feeling miserable. There’s much hubbub about the result.

Then Xtra factor. They had asked if I would go on: my PR had politely declined on my behalf, anticipating such an answer. Blame Coops for insisting I go on if you were in any way bewildered by my appearance. The more observant amongst you will have noted that, in order not to annoy, I don’t do TV interviews or appear as a ‘celeb’ on other shows, but I thought this would be a fun exception. And as they were nice enough to find me a couple of tickets to the show, it would have been churlish to decline. So on I went, up and into the little room at the back, and sat on a silver bar-stool and tried not to lean on the wobbly long table held down by stage-weights. Holly was a treasure; the Backstreet Boys very charming and polite; I mentioned something about buttocks, and then met the contestants as they poured in.

There’s a lovely and bizarre thing about being a little well-known: namely that when you meet people you’re excited to meet, they sometimes are excited to meet you too. So now here I am shaking hands with the guys, running round to give Lucie and Stacey a hug, and it’s all very easy and friendly: exactly how you hope it will be. I pass on a hello from Ethan (a previous contestant whom I know a little) to Danyl: they were good friends during the process, and as Ethan is delightful, I can only imagine Danyl is every bit the same. I meet Rachel, who is just wonderful and does not seem too miserable, and later see her stood privately with Dannii, in a tender, hand-holding conversation of support. I don’t know why I would have wondered whether the affection we see from mentors would continue off-screen, but it’s lovely to note that it does.

Back in the Xtra factor studio for a moment, I meet the twins, who are bright and sweet. They will do well in some form, probably as presenters, and thankfully seem untainted by the fuss surrounding them. I chat with Louis, who is utterly lovely. Dannii, on her own and having just lost Rachel, tiny and gorgeous in the bustle of camera crew and tall mingling bodies, seems vulnerable and a little bewildered. I remember Ethan speaking very highly of her.

And then down to the bar to mix with families and contestants. Stacey’s family are there again, Gemma (Stacey’s sister, every bit as lovely and identical in manner and appearance) holding gorgeous little Zach. I meet Dad – David – a clearly talented photographer and every bit as wonderful as the other members of his family with whom I chatter. It becomes clear that their most famous daughter’s nation-wooing charisma is shared throughout that home, and comes from a warm, deep place. Danyl’s sister Janine introduces herself and we chat enthusiastically: I am a big fan of her brother and think he deserves to win. Danyl is delightful: if he is at all cocky then he shares it with the other over-25s. All the contestants have been thrown into the same revolting world of instant celebrity that ruins so many, and they all deal with it according to their means. The older singers just seem to lap it up a little more: they are already acting like celebrities in a way that the younger ones are not. Of course to a public that feels (probably wrongly) that they are creating these stars, there is something more endearing about the baffled humility of the younger contestants. Tricky as it certainly is, we should be able to allow the older chaps to enjoy their fame and the celebrity that we’re supposedly handing them. It would be nice to enjoy it through them rather than resent it. We really don’t own them.

As well as Stacey, I have huge soft spots for Joe and Lucie, and am surprised by Lucie’s confidence in real life (a perfectly pleasant confidence at that) and Joe’s polite, charming uneasiness with all the attention. I give Joe – again, teensy-weensy – a big hug and his Aunty Betty, so proud of her nephew, takes a picture of us.

Joe, Lucy and Stacey seem to offer us ‘journeys’, and sadly, when we’re watching these people every week for so long, we value journeys over talent. This is the power of story, and the producers know it well. Danyl will struggle to give us a good journey, for he has come in already at the top. He’s so good, he has nowhere to go. This we can unfairly read as smugness. Now he needs to be knocked down in order to build up again, to a new place with new learnings: it’s the hero’s struggle, and will be important for him if he’s going to win. Stacey, Joe and Lucy have a clearer story: modest and much-loved, they rise to find the star within themselves. And I hope they do, even if it’s just a confection of the show, because I love a good story and bawl my eyes out at anyone winning anything.

I speak to Rachel again and her family. She is on great form and seems to be enjoying herself in the crazy after-show atmosphere. Her family are charming, understated, dignified. Poor Lloyd’s voice has gone; he is teary from, I presume, a mixture of emotion and illness, and is pootling about unable to talk. Another chat with Louis, who is candid, friendly and hugely, hugely likeable.

From the bar now, upstairs to Dermot’s dressing room, where the suave embodiment of ‘makes-it-look-easy’ is chatting with friends and crew. We share, hoodathunkit, the same stylist and a predilection for brown suits, so there is some sartorial chatter. Dermot is lovely.

We leave grinning widely from an evening that has never for a moment stopped being fun. It has been utter, delicious madness. I have forgotten all concerns. And when we were hanging around in the empty studio, I stole Cheryl Cole’s pack of Smints from the desk to give to Coops. Hope that’s alright.