Subject to all sorts of possible changes, the following goodies (or baddies, really depends) are planned: the ‘Enigma‘ show should be broadcast (in it’s 3-hours-squeezed-into-one-and-a-half form) around mid-December, and hopefully in early January, a documentary about my good self will air for those who enjoy such things, alongside a broadcast of the most-voted-for-fave-special (you can vote, I am assured, here). My oldest pal from school (now a multi-award-winning filmmaker) was approached, quite by coincidence, to make the documentary, and it’s deepened our friendship and been a real joy exploring some nostalgic avenues together.

Also, in January, I’m quite excited that they’re planning to release a box-set of the stage shows (at least the ones that made it to TV). So Something Wicked, And Evening of Wonders, and Enigma will be all nicely packaged up for your DVD delectation. Imagine! What larks.

As you may know, I’m writing the new stage show, Svengali: the long and short of it is that we rehearse next January/FebÂ for the tour that starts in March. And somewhere in there we hope to film a new special, though when that will make the screens I have no idea.

Um, that’s it for now. Today I’m drinking tea and painting Patrick Hughes and I’ll show you that and the little story around it when it’s done.

Some terrific animated lectures by The RSA on YouTube – I’ve been quite captivated all morning.

On BBC4 tonight at 9 there is a programme about self-portraits. Featured in it is my dear friend Patrick Hughes, who creates astounding reverse-perspective paintings/sculptures that appear to move with you as you walk around the room.

I have a few of his pieces at home and it is delightful watching visitors unable to fathom what they are experiencing. He has recently cast my little head for a ‘reverspective’ portrait, and has also done one of himself, which will appear in the BBC4 show. Mine, I hear, is ready too, and I’m picking it up from him tomorrow. We’ve in fact done a portrait swap: I am painting him in return for his portrait of me.

I’ll feature both on this blog – including the pictures of me getting my head cast – when I have everything ready to show you. He is the most richly wonderful man, and a unique artist, so do catch the show tonight if you can to get a heads-up (pun intended) on this guy.

Little Quaker, no name yet. Adorable: here he is nibbling Coopy’s lady: 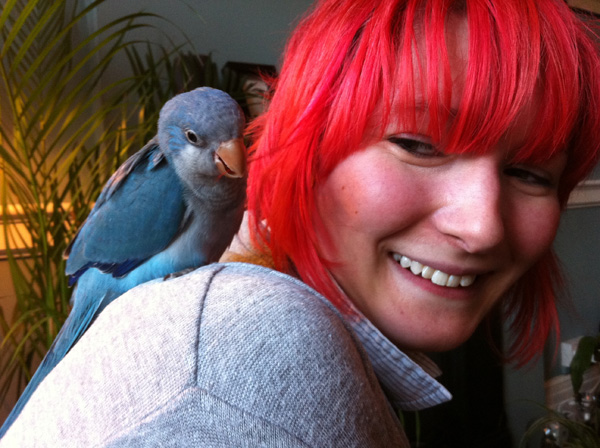 EDIT: Great names, thank you. We have a winner: RT @baquetaUk How about Rasputin?

Google translates the title as ‘How I Control The View’.