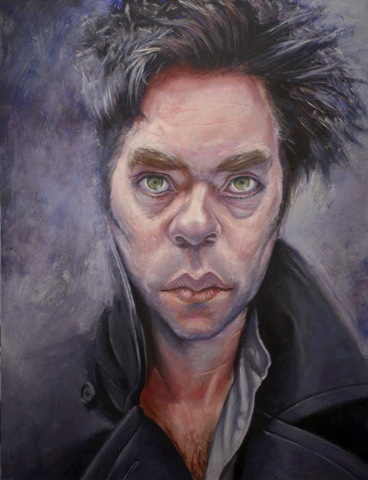 (Rufus Wainwright by local artist, who is aiming to do a new one of him next, as soon as he gets the chance)

A really lovely run in Birmingham. Warm, responsive audiences (comparatively reserved at the end but hugely up-for-it throughout: a kind of opposite of Cardiff audiences) and a beautiful city. Birmingham has such a pride to it: when they re-developed Bristol’s city centre they did so with no sense of delight or style. Birmingham, by contrast, has become a truly enjoyable place. Found myself staying in the same hotel as Cameron and Clegg following the debates… I suppose I completed the trio, seeing as the other Brown had headed home. Hmm. I think I missed an opportunity there.

Thank you for coming if you did. I understand that some people were waiting for hours in the rain by stage door after being repeatedly assured that I had left (I had to dash off to a dinner appointment): apologies, but please do take it at face value if they say I’ve gone. They shouldn’t ever say it if I haven’t.

Spent much time around the canals, two excellent lunches at Bank, the best hot chocolate in the country (and excellent coffee) at Cafe Vergnano at the Mailbox (there’s one in Charing Cross Rd too, though the Brum one is friendlier and nicer), pottering around at snail’s pace, listening to Rufus Wainwright’s new album on my headphones. The new album – All Days are Nights: Songs For Lulu – is such a beautiful thing. I listen to RW continuously while painting, and am a hugely devoted fan. Last Monday, on a rare night off from the tour, I took Â group of us to have dinner and see him in Oxford, a wonderful evening. The first half was a sing-through of the new album; we were instructed not to applaud until after he had (preposterously but brilliantly) exited the stage, the second a relative lightening of mood with a bunch of old favourites. Afterwards he appeared to us few invited guests, somewhat distant as he always is, to say a quick hello, mascara in stained rivers down his face, almost as if it were still part of the performance. As often seems to be the case, Helena Bonham Carter was nearby too: I have adored her ever since watching her being interviewed on some awful red-carpet thing going into the Willy Wonka premier, inside which I was already tucked away. One sits for hours before the film starts and watches a broadcast of an endless stream of stars answering inane questions from a dedicated hapless interviewer parked outside, and occasionally a brilliant and irresponsible answer from an interviewee breaks the turgid atmosphere in the auditorium and causes a burst of grateful applause. I cannot remember what HBC said, but she was so brilliantly unruffled by the whole thing, so couldn’t-care-less for any of the nonsense, that her unperturbed answers lit up the sham of the whole ritual’s absurdity. Since then I have found myself alongside her many times, normally when in Rufus’ company, but never said hello. On each occasion I pass by imagining she wouldn’t know me from Adam: then, when I leave, I wonder if she might have done, and whether I had seemed rude. Such are the conflicts of C-rate celebrity.

If you do not know Rufus Wainwright, he is a staggeringly talented singer/songwriter, with a style that is difficult to define, leaping from heartbreaking eulogies to a tragic self, to bawdy high camp, but in the main occupying a perennial, epic, tortured dream-space of self-apotheosis and virtuosic performance. His voice is as unusual as his music, and his articulation sometimes mellifluous to the point of incomprehensibility. For some this proves a stumbling block: equally, the songwriting is unyieldingly internal and coded, leaving me for one pretty clueless as to the meaning of some of the pieces. But this is part of the Rufus experience, and as a devotee of Bach’s equally solitary suites for lonely solo instruments, I revel in such ‘private’ music. Others, I know, just find him whiny and self-absorbed. To me this is like the criticism of Bach as sounding like a sewing machine: yes, all those things, and then some, if you must.

If you’re considering getting hold of an album, I’d recommend Want One as a good starting point, and be prepared for the songs, like anything of superlative quality, to yield their secrets over time. They are not all an easy listen to begin with.

We are returning to the Alexandra Theatre in six weeks or so, and looking forward to it hugely. The crew were one of the nicest we’ve met on tour. And the audiences just lovely. I shall look forward to more dreamy wanderings, having now missed for good my chance to tinker with the election candidates.